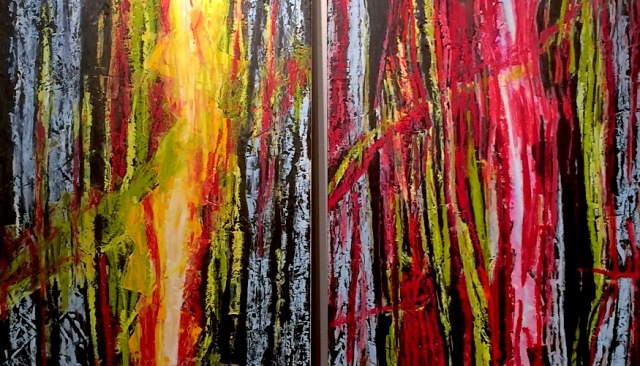 For the exhibition Sanctuary, SOHO20 member artist Darla Bjork presents two new bodies of work, both engaged in various states of anxiety and meditation. Her new series of oil stick paintings on panel, Garden Images, suggests the perspective of a botanist in viewing a prismatic spectrum of exotic and mundane specimens in microscopic detail. The lines that run through her elongated panels could be organic pathways through which vibrant liquids flow – whether carrying chlorophyll through a leaf, blood through a body, or water through an estuary. Although evocative of vital ebbs and flows, these paintings imagine what is not quite observable, relaying an intensity of emotion that escapes systems of visual measurement.

In her second series, Political Works on Paper, Bjork captures the vivacity of a very different subject through a series of animated faces, reminiscent of a certain omnipresent orange man. This series is in direct connection to an earlier body of work depicting screaming faces, made during her time spent working at a mental hospital, a personal release while in constant proximity to institutionalized pain. Likewise, her new drawings are saturated to their maximum capacity with anguish and fear, this time as a response to a feeling of post-election paralysis.

Despite the heightened energy in her new works, the exhibition’s title signifies a refuge or safe space. Bjork’s work has always occupied a space of retreat, but not strictly in the sense of escape. A psychiatrist by profession, she spent her life providing people with tools to cope with anxiety, depression, and other mental ailments. Her art practice, in a sense, has been her own tool to find release and repose, a space of both aggression and meditation in uncertain times.