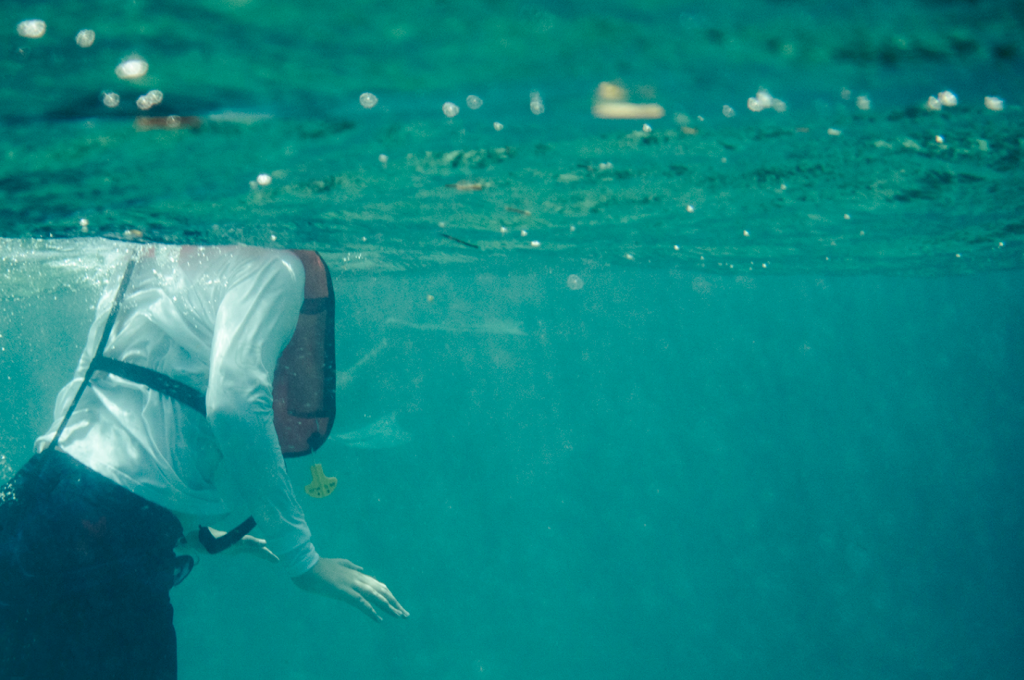 “The idea of focusing on water and snorkelers was initially about the possibility of addressing the “primal.” Is there such a thing? By photographing the snorkelers’ connections to water—from harmony to discord, can I get to something primal? But it’s also about the need to go under.  Vacation as escape. There’s so much noise… above ground we can’t escape talk of politics, personal demons.” – Debbie Rasiel

SOHO20 is pleased to present an exhibition of photographic works by Debbie Rasiel, Paradise, which questions the notion and possibility of rest, escape, and removal in the present moment.

Although her last project at the gallery also explored attributes of vacation, with Paradise this consideration has, literally and figuratively, submerged.  Using snorkeling, a popular tourist activity, Rasiel flips the notion of paradise with bodies cropped or foreshortened at odd angles, captured in ambiguous moments between movements.  Their limbs, at times abstracted by sputtering water, appear to float nebulously as if in placid reflection, or death.  While the exhibition’s title may suggest ease and escape, from what or how remains intentionally obtuse: reminiscent of Goya’s canine, her figures swim in a morose landscape.  It is this quality of held or caught in-betweenness, or “the dichotomy between the beauty of the surface, and its potential dangers, below,” that beautifully catches the images.

Rasiel, whose work in general suggests a desire to reference human struggles of the universal and the quotidian, connotes potential layers of meaning within the figures’ floating heldness.  They speak to a peculiar balance of privilege and frustration, and even question societal frameworks in defining notions of ease, rest, luxury, escape, security, release, safety, or being “off-grid.”  That vacations are, for those lucky enough to partake of them, assumed opportunities for escape, is a question from the work.

Debbie Rasiel is a documentary photographer who has collaborated and co-written grants with public health organizations, NGO’s, and universities. In January she finished a two-year project in Vietnam funded by the Wellcome International Engagement Award. Rasiel has curated and written for other photographers, including an exhibition on Dorothea Lange, Human Documents, for the BYU Museum of Art and the Steinbeck Center.  Her documentary work in South Africa was published in Women on Purpose/ Phumani Paper University of Johannesburg Press. Her documentary work has been published in news blogs and online-journals internationally. She has exhibited in New York, Miami, and Vietnam. Her work is in the collections of Rutgers University, the University of Johannesburg, and CCIHP (Vietnam). Rasiel holds a ABD PhD in Art History and criticism from Graduate Center of the City University of New York, a MA from Tufts University, and a BFA from the University of Florida.  She also studied digital media at the International Center of Photography.