See the Review in Delicious Line by Harry Newman. 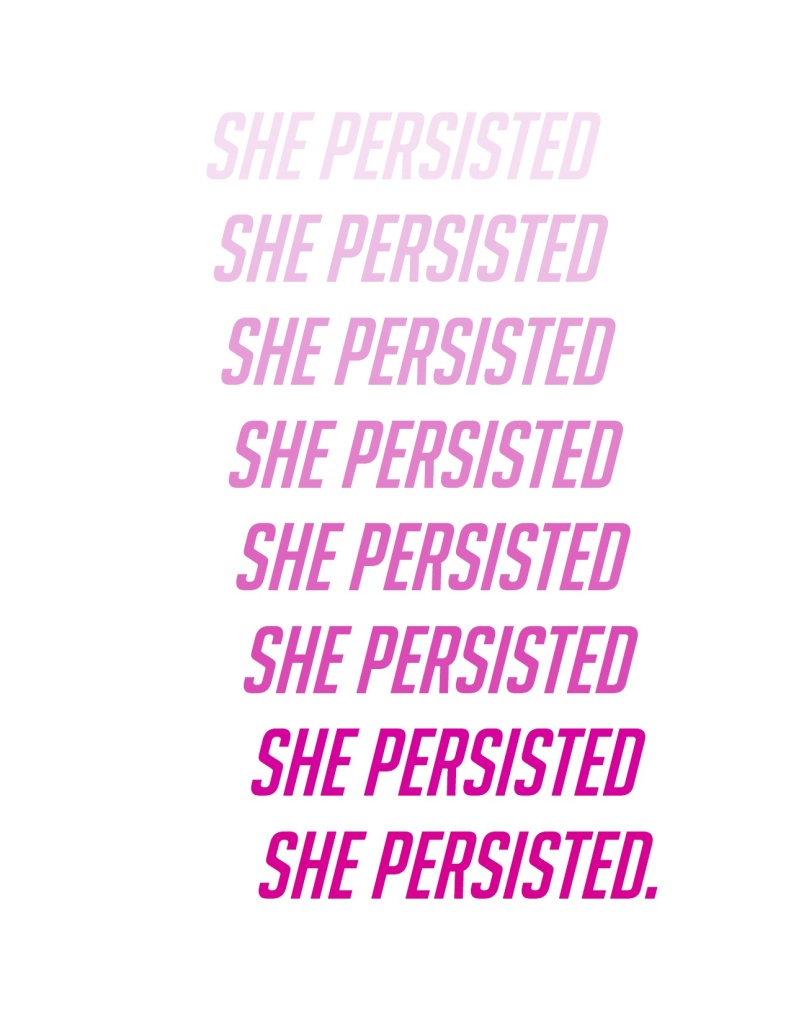 SOHO20 presents She Persisted, the 2017 exhibition of works by our National Affiliates members.

The shows title is taken from Senate Majority Leader Mitch McConnell’s now infamous words regarding Elizabeth Warren: “Sen. Warren was giving a lengthy speech,” he said. “She had appeared to violate the rule. She was warned. She was given an explanation. Nevertheless, she persisted.” Unlike many terms in the art world that seem to lose meaning through repeated use, the National Affiliates choose to identify with a phrase that has become a ‘weaponized meme’ – one that gains traction the more it is copied, pasted, and tweeted; one that has become a rallying cry for every woman who has been silenced. The phrase appropriates the language of the oppressor, filling the words with support in place of misogyny.

The National Affiliates work accomplishes a similar metamorphosis. Each artist uses her unique voice to transform her materials into an investigation of persistence, both metaphorically and physically, from Gail Hoffman’s invocation of the glass ceiling to B Amore’s archivally preserved found objects. At home within an organization that has served as a support structure for women artists since 1973, the title is both a history and a promise.

B Amore uses assorted found materials and gloves that have been archivally preserved, to create work which speaks to our commonly shared humanity. Her wall sculpture, “Peace and Reconciliation,” features a quote of Desmond Tutu as its central element. My humanity is caught up, is inextricably bound up in yours. We belong in the same bundle of life.  We say a person is a person.  It is not, “I think therefore I am”.  It says, rather, “I am a human being because I belong, I participate, I share.”

Fran Bull presents a painting that she made in the 1990’s, sparked by the awareness of how difficult it is to be a black woman in America, a feeling with which she could sympathize but not truly know. Borrowing elements from a Pre-classical style, she has reduced the forms and used gold to allude to the sacred. In an attempt to sanctify her subject she has created an image that borrows from Icon painting, and through the frame she simultaneously evokes a grandeur and something ersatz or tattered.

Laura Cloud’s series of photographs, Mosque: Tetuoan, Morocco, was created during a recent residency at Green Olive Arts in Tetouan, Morocco, during the month of Ramadan. Cloud’s interdisciplinary practice plays with and deconstructs cultural traditions, stereotypes, and mythologies, including her own personal identification with the name “Cloud.”

Louise Farrell returns her sculptural roots in the classical process of casting in bronze. The cyclical swings of her practice have conjoined figuration and abstraction in a range of processes that has included casting, trompe-l’oeil installation, public art, glazed hand-built ceramic, weaving, encaustic, and direct carving.

In response to the election, Gail Hoffman has created a miniature cast bronze installation which addresses the glass ceiling metaphor. Persistence, determination and vindication for women is the message in this narrative piece. Three little girls in pinafores look up to see an image of a woman’s face rise atop a ladder through the broken roof of a dilapidated building.

The title of Elizabeth Michelman’s newest video work, Change encapsulates a range of themes, from the mundane to the eternal. Reformulating her casual documentary footage of a church and laundromat into a fictive narrative, she twists the language of video editing to reveal disturbing messages that underlie urban life. Michelman unpredictably juxtaposes formal properties of sculpture, painting, music, installation, video and poetry in her multidisciplinary practice.  Her work exposes paradoxical relationships lurking at the boundaries of disparate artistic languages.

In Between the Curtains, an homage to Frida Kahlo’s work by the same title, Nelleke Nix depicts POTUS45 in place and in the style of Kahlo’s self-portrait – appearing between two golden curtains, holding a letter in his hand. Whereas the original work was dedicated to Kahlo’s lover, Leon Trotsky, Nix’s painting highlights the President’s admiration for another famous Russian: Vladimir Putin.

Through this new series of drawings, Barb Rehg continues her search to see her work with a ‘new eye.’ She has taken what has once constituted one form, and reconfigured it, forcing herself to rejoin the parts into a new construction. Instigated by the current climate of our society, Rehg responds to the subconscious compulsion to seek resolution in the disarray.

Ann Rowles makes what she refers to as “site-adaptable” sculptures, which change with every installation in response to the space and the on-site curator’s decision on how it will be shown. For the last several years she has been using crochet as her primary means of making sculpture. These works have become more abstract as she searches for non-verbal forms to understand situations and feelings. This meditative, labor-intensive technique connects her with long-dead relatives and the history of women’s domestic work.

Georgia Strange’s newest works, prints on silk and pseudo-silk, are a response to the current political environment, depicting the commodification of everything, including human life. This work is a reflection on the recent trajectory of our nation, where the celebration of gender equality that would be signified by the election of the first woman to the highest political office in the US was transmogrified into a state of consuming anxiety by the unexpected affirmation of the wealthy white male establishment.

Rosie G. Thompson‘s Open House series are painted wood constructions of houses that have been split apart, each containing intact skeletal remains depicting the spiritual qualities of everyday rites, rituals, and practices. Through this series, Thompson celebrates the poetic in life, death, and afterlife using figurative representations of an inner integrity that transcends the everyday.

Virginia Tyler has worked with metal casters in Ghana for the past 20 years. She is showing A Tribute to the God Tree, a collaboration with Joseph Agyemang, Paul Amponsah, and the craftsmen in their workshop in the village of Krofofrom. Their relief sculpture is inspired by the Name Duah, or God Tree, whose medicinal bark brings down fevers and has protected the children of their village from the deadly fevers of malaria throughout their early years, essentially saving the life of every person in the village. It brought down Tyler’s fevers when she was working in the village as well. The delicate patterning of the relief sculpture reflects patterns in the bark of the tree and protective feeling the villagers have toward it.