Gabrielle D’Angelo and Christhian Diaz: Around, Around, Pull, Hold

Presented as part of Interference

VIEW IMAGES OF THE PERFORMANCE 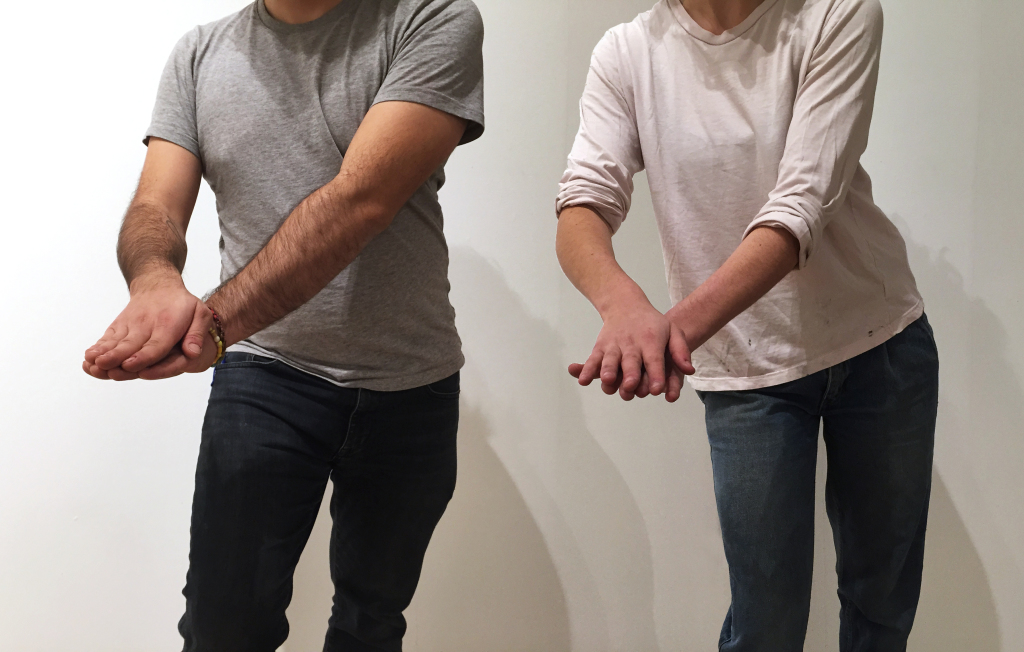 SOHO20 was excited to announce Around, Around, Pull, Hold, the first collaboration between Gabrielle D’Angelo and Christhian Diaz, and the second performance in the ongoing series Interference. As both artists have a personal connection to movement, this work aimed to create a condition for their practices to coexist. Around, Around, Pull, Hold is the result of their time spent working together in SOHO20’s gallery space, both responding to each other and responding to the space itself.

The dance is an accumulation of gestures derived specifically from D’Angelo and Diaz’s individual relationships to movement – in response to conversation, direction, and memory. Repetition is used to sustain gestures and inform our understanding of the event unfolding. The outcome of this collaboration revealed a process of encouragement, pushing both artists to take greater risks as they found ways to include each other in the process of making a dance together.

Christhian Diaz received his BFA from the Cooper Union where he first began making collaborative performance work. Though he has an independent practice, collaboration has been central to his work. In recent years he has performed at the Whitney Biennial, MoMA PS1 Printshop, the Museum of Arts and Design, Movement Research at Judson Church, The Center for Performance Research, and Beam Center, among others. He is a 2013 MacDowell fellow, was co-organizer of Trade School, and currently organizes a series of open performance nights out of his living room called Fifteen Minutes of Doing Something Now.

Gabrielle D’Angelo lives and works in New York and received her BFA from The Cooper Union in 2011. In recent years she has performed at various venues including, HERE Center as part of the Performance Mix Festival, Movement Research at Judson Church, The Center for Performance Research and Beam Center. She has taken part in both the Chez Bushwick and Cora Dance artist in residency programs. While choreographing and performing her own work, D’Angelo also makes paintings. She had a solo show at Chashama 461 gallery in 2015. This twofold output and consideration of dance in relation to painting and vice versa is integral to D’Angelo’s practice. D’Angelo currently has a painting studio in Red Hook.